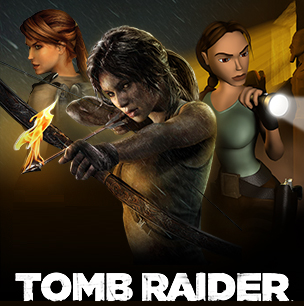 "If there's one thing I've learned, it's that nothing is lost forever."
— Lara Croft and the Guardian of Light
Advertisement:

Tomb Raider is a video game franchise starring an adventurer archaeologist named Lara Croft. In most of the games, she travels around the world looking for highly prized treasures while avoiding rival hunters, wildlife, and various death traps.

Since its debut in 1996, the games have sold millions of copies around the world, appeared on almost every single format to date starting from the 5th-generation era, and have spawned a series of comic books, three movies, and an animated series.

The first six games were created by British developer Core Design. When the series began to decline and an attempt was made to give it a Darker and Edgier makeover, sales dropped and the publisher of the series, Eidos Interactive, handed it over to American developer Crystal Dynamics (who made most of the Legacy of Kain series).

Literature set after The Last Revelation

Example of:
Eating the Eye Candy