Video Game / Lara Croft and the Guardian of Light 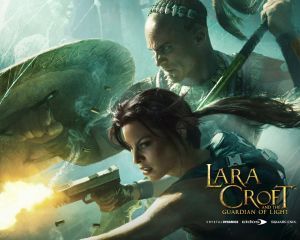 Lara Croft And The Guardian Of Light is a downloadable Gaiden Game in the Tomb Raider series. It was developed by Crystal Dynamics for Xbox 360, PS3 and PC.

The game is notable for featuring online co-op. Gameplay-wise, Guardian of Light is a third person 3D rendered isometric platformer/action title with puzzle elements. It is the only game in the series not to have Tomb Raider in the title. It also doesn't seem to have any place in either of the series' continuity (although it does use some of the music from the three Crystal Dynamics games), meaning players can interpret it how they wish.

Would receive a sequel: Lara Croft and the Temple of Osiris, in 2014.