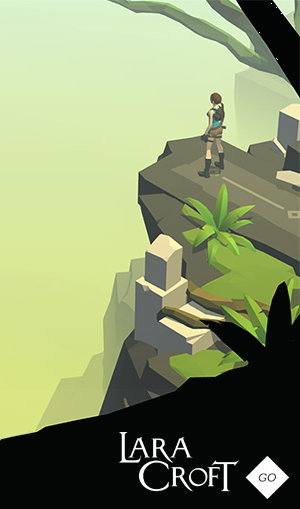 Lara Croft GO is a spin-off of the Tomb Raider series. Like the games of the main series, it features Adventurer Archaeologist Lara Croft attempting to traverse inhospitable environments while solving puzzles, avoiding traps, and fighting off hostile wildlife. Unlike the main series, it presents these challenges as a turn-based Puzzle Game rather than an Action-Adventure.
Advertisement:

The basic gameplay consists of Lara moving around a isometric board-like map; there are fixed paths, and Lara moves down them one tile at a time. Tiles can be on different levels, and can sometimes be moved. There may be traps to avoid, hostile animals to kill, levers to pull, blocks to push, and pressure plates to stand on (or weigh down). Turns alternate between Lara and the rest of the world — she moves, and then everything else does (enemies, boulders, timers, etc.). You have unlimited time to plan your next steps, but have to be careful you don't leave yourself with no good moves.

Lara Croft GO was developed by Square Enix Montreal, and was released for Android, iOS, Windows, and Windows Phone in 2015. Two free downloadable expansions were released for it: Shard of Life (2015) and Mirror of Spirits (2016; developed by KO_OP Mode). It is the second entry in a trilogy of "GO" games, covering multiple franchises owned by Square Enix — the first was set in the Hitman universe and the third was set in the Deus Ex universe.

Not a game about wandering around in the real world and trying to catch Lara Croft.