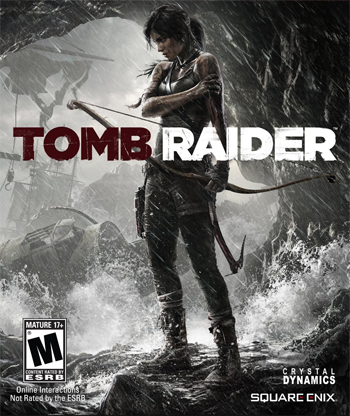 A survivor is born.
Roth: Sometimes you've got to make sacrifices, Lara. You can't save everyone.
Lara: I know about sacrifices.
Roth: No, you know about loss. Sacrifice is a choice you make. Loss is a choice made for you.
Advertisement:

Tomb Raider is a 2013 video game. Published by Square Enix and developed by Crystal Dynamics, it was released for the PlayStation 3, Xbox 360, and PC. An updated version, titled Tomb Raider: Definitive Edition, was released for the PlayStation 4 and Xbox One in 2014. On April 27th 2016, the game was ported over to macOS and Linux by Feral Interactive. The game is the second continuity reboot of the Tomb Raider series. Tomb Raider also serves as an origins episode for the franchise, showing how Lara Croft became the badass adventurer archaeologist we know and love.

The story opens with a fresh out of university, 21 year old Lara joining an archaeological expedition in search of the lost island kingdom of Yamatai, home of an ancient Japanese queen named Himiko who was fabled to control the very weather itself. However, following a shipwreck that cuts her off from the rest of the expedition with no food or supplies of her own, Lara must learn to survive while fighting a dangerous cult that also calls Yamatai their home.

A prologue comic, Tomb Raider: The Beginning, was produced by Dark Horse Comics as a pre-order bonus for Best Buy customers. It serves to flesh out the game's supporting cast, and largely deals with Whitman's struggle to fund the expedition to Yamatai. Like the game, The Beginning was written by Rhianna Pratchett.

This is also the first game of the franchise that was created after Square Enix bought Eidos Interactive, and although they gave total creative freedom to Crystal Dynamics, their influence can be subtly felt.

Followed by the 2015 title Rise of the Tomb Raider. Also has an interquel comic, written by Gail Simone (with Rhianna Pratchett cowriting some issues), that bridges the gap between the two games, a novel

picking up right after the first game, and another interquel comic starting after the second game written by Mariko Tamaki.

The 2018 Tomb Raider movie is a Live-Action Adaptation of this game, with some elements taken from the second game. An arcade adaptation of the game (with gameplay based on Rabbids Hollywood, of all games) was released ahead of the movie as promotion.