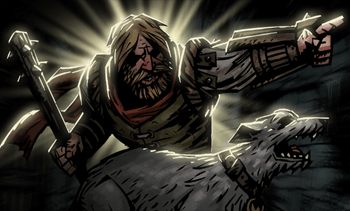 Any creature which has been trained specifically to fight alongside its handler, like an attack dog or equivalent.

Generally speaking, in order to qualify as an attack animal the creature must:

This trope is likely derived from domestic animals which were used for their attack abilities (dogs being the most obvious). See the Real Life section for more details. Using a "weapon" like this often implies that a character is either nature-loving and generally an all around good person who animals trust, or a genius (possibly mad) who can create or control such things or evil, by virtue of "enslaving" them.

A sub-trope of Living Weapon, Beast of Battle and The Brute. Sister trope to Animal Assassin and Bioweapon Beast. The Weapon of Choice for The Beastmaster and the Nature Hero (although they might as easily avert this trope by making them actual characters). When everyone uses these and only has them attack one another then you're almost certainly in a Mons series. Contrast the Cool Pet, Loyal Animal Companion and Robot Buddy, who are usually characters in their own right rather than just weapons, though they can overlap if the animal in question (biological or robotic) is also supposed to serve as a non-human warrior (especially if they're a military animal, or their master is an action-oriented superhero/supervillain) in addition to being a pet/loyal companion/friend. If they're picked up and have their body used as a literal weapon, see Equippable Ally. Related to Weaponized Offspring.