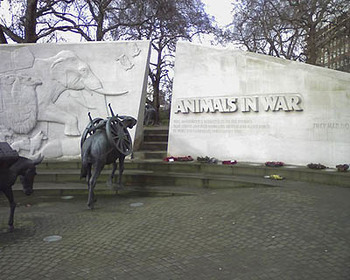 Animals In War memorial, erected in London.
"This monument is dedicated to all the animals that served and died alongside British and Allied forces in wars and campaigns throughout time. They had no choice."
Words inscribed on the memorial.
Advertisement:

Ever wondered where all the inspiration for the Weaponized Animal or Beast of Battle came from? Like everything else, it came from Real Life. Animals have been used in war for the entirety of human history, for mundane jobs like field work, cargo hauling, and pest control, to more specialized roles such as communications, not to mention the prospect of them being mounts or an Attack Animal. The United Kingdom even has a special commemoration for particularly brave or exceptional military animals, known as the Dickin Medal.

This Useful Notes page will provide information and context pertaining to such animals. Buckle up, it could get sad. 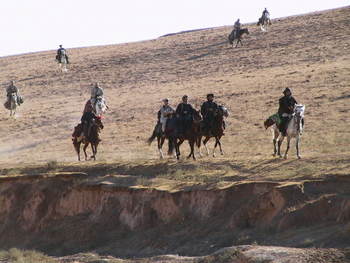 Horses have enjoyed a long and illustrious history alongside humans in war. In the entire history of the world, horses have been utilized in militaries much more than any other animal. From a tactical standpoint, horses are extremely mobile and require relatively little rest. They can trek long distances hauling cargo or carrying riders, and their speed allows armies to outmaneuver or outrun foes. From a battle standpoint, a pissed horse is chaos on a battlefield, and horses were trained to kick, bite, and stomp either on command or reflexively. A single rider armed with a long-reaching weapon such as a lance or bow could run circles around unmounted enemies and kill them one by one.

Five horses have been recognized by the United Kingdom for their service, and were granted the Dickin Medal.
Dogs 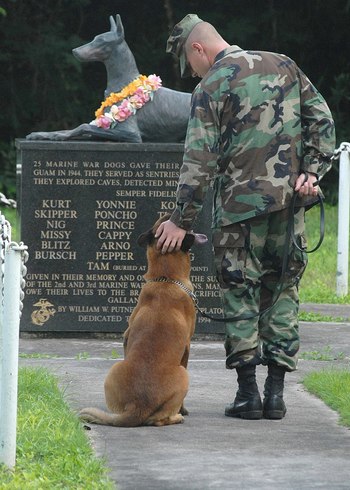 A US Navy dog handler and his companion visiting the National War Dog Cemetery in Naval Base Guam.

It's only natural that man's best friend follow into conflict. Being the first animal ever domesticated by humans, dogs have undoubtedly been involved in far more battles and conquests than we have recorded history for. Throughout history, dogs have primarily been used for their superpowered tracking abilities and ability to sense danger, whether it's enemy warriors sneaking into your encampment or sniffing out explosives buried in the sand, or chasing fleeing enemies in the field. In battle, dogs are obviously terrifying combatants and many soldiers feel a primal fear at the sound of barking and snarling. Dogs have been weaponized by, more or less, every culture that had access to them. A less appreciated aspect, however, is the morale boost a dog brings. War Is Hell after all, and canine friendship has often been cited as one of the primary reasons some soldiers can stay in good spirits during war.

Many, many dogs have been granted military awards. In addition to the Dickin Medal, many US dogs have been given Purple Hearts or Silver Stars, however these weren't officially issued and were instead given to the dogs by their handlers with donated medals. See more below. 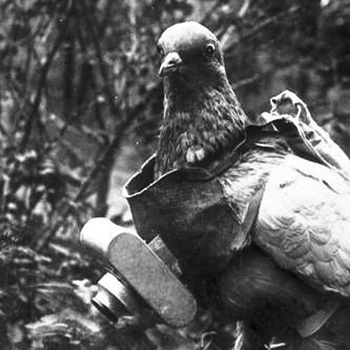 A German unmanned aerial reconnaissance unit. A pigeon with a camera.

You aren't dreaming. Pigeons are likely the most utilized military animal of the contemporary age. The utility of the homing pigeon has been known for centuries, but pigeons had a massive boom in use during the two World Wars. Their homing instinct allows them to return to their nests over extremely long distances; the vector of this is unknown, but is believed to be a form of magnetoreception. They also fly swiftly, and fly at high altitudes, making them very effective for communication. During wartime, marksmen would be given good marks for shooting an enemy carrier pigeon from the sky, while shooting an allied one would be considered an action worth a criminal fine. Message delivery was the primary usage for homing pigeons, but, as seen above, other experiments were attempted, including strapping cameras to pigeons, or using them as bomb-guidance systems. Pigeons saw open official use until 1966, although there are some reports that a few modern military groups use them today.

While a lot of pigeons have received medals for their service, a few stand out.

Besides horses, many animals have been used to bear payloads or passengers. Such animals were often stocky, strong, and less-than mild mannered. Horses are renowned for their steady tempers and calmness. Other animals, not so much, which is why they either saw less extensive use, or were rapidly abandoned when it was obvious they could be a danger to their handlers.

War Elephants — massive, hulking beasts all grey skin and ivory. The largest land animal has actually had a pretty extensive history serving in wars. The reason why should be obvious — they're large, strong, intelligent, and intimidating; their exotic appearance was an absolute horror to cultures who had never seen them before. They were often used to carry commanders, who could survey the battlefield from the high vantage point on the elephant's back, or held mounted archers, who could use the same vantage point to accurately shoot. Otherwise, a charging elephant will kill just about anybody. Training these beasts, however, was no easy task, and while their intelligence actually makes them highly trainable, it often involved methods involving animal cruelty. The disadvantages are great, as well; elephants are easily spooked, and a terrified elephant is more of a danger to it's own army than it's enemy, since it'll turn around and trample it's own backup. Their intelligence can also be a problem, as they recognize danger much more readily than horses. The practice of training war elephants is called Elephantry, and the elephants used are vastly Asian Elephants, as opposed to African Elephant, which is more well-known in the modern world.

While the horse and elephant were the most well known and notable mounts of war, others have been recorded.

While dogs have always been the primary method of using an animal as an actual weapon, they are not the only animals that have been trained for such purposes. Many have been trained to thrive in the shock of combat, while in more modern times, tragically, before animal cruelty and other awareness campaigns, animals were often used as living bombs. Thankfully, those cases were either quickly shut-down experiments, or otherwise were proven ineffective.

Cats actually have a larger military history than once thought. Big cats were trained primarily in ancient times, while in the modern day cats are used by navies for pest control, hunting rats that stow away on board. Some of these cats are remembered specifically, and others are known by general knowledge.

This section is dedicated to all the attempts to turn animals into self-guiding explosives. While the moral implications here are obvious, it still happened. Besides the dogs listed above:

The US and Russian militaries have trained several marine mammals for military reconnaissance, from dolphins to sea lions. They have been trained to detect explosives and rescue lost divers.

Works of fiction with focus on military animals: