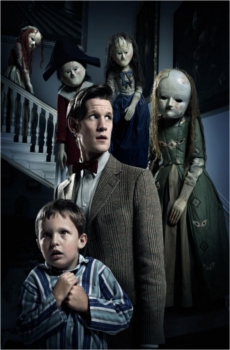 Tick tock and all too soon you and I must die...
Tick tock goes the clock, and all the years they fly...
Advertisement:

The one with the scary dolls and nursery rhyme.

A distress call from a terrified little boy breaks through all barriers of time and space, leading the Doctor to visit the scariest place in the Universe: George's bedroom. George is terrorized by obsessive-compulsive disorder, night terrors and every fear you can possibly imagine, which all live in his bedroom cupboard. That's not a coincidence: his parents thought that locking scary toys safely away in the cupboard would help their son sleep. It didn't work, obviously, and now they're desperate — George needs a doctor.

Cue the distress call heard by the Doctor, Amy and Rory, who visit a block of flats. It's time for the Doctor to make a house call, and the Doctor admits one of the scariest places in the universe is "a child's bedroom". Team TARDIS splits up and interviews some of the residents with door-to-door asking and phony identities. This isn't where The Beautiful Elite live: little George and his neighbours really look like ordinary English people, living in an ordinary English world. You could take a bus therenote  and not a flying one, either .

After a considerable amount of time, the Doctor finds the flat where George lives. He introduces himself to Alex, George's father, who assumes that this is the doctor his wife told him she found. As the Doctor talks to George about the monsters, Amy and Rory go into a lift, only for it to plummet. The duo find themselves in a really conspicuous-looking house.

Then a few more of the residents start having really bad things happening to them. They get sucked into the ground.

As the Doctor looks around, he scans the cupboard with the sonic screwdriver, and he is utterly horrified by whatever result he got. (Before you ask: it's not Hitler.) Alex doesn't take the Doctor seriously any more by that point and asks him to leave, whilst the Doctor is trying to make tea and asking, "Do you have any Jammie Dodgers?" Alex is quite insistent and just wants him out of his flat.

After some flip-flopping about whether or not to open the cupboard (that has Alex stressed out and confused) the Doctor opens it and he finds... Absolutely nothing. Why not? A series of questions and pictures follow until "Claire can't have kids!" If George's mother can't have kids, then who or... what... is George?

Suddenly, George does something terrifying involving the cupboard, and Alex and the Doctor get sucked in. They're in the same house as Amy and Rory. The married duo are attacked by some creepy wooden dolls, and one of the victims from earlier gets turned into a doll as well. Amy and Rory hide in another room, but as they try to bust out, Amy is captured and turned into a doll. Rory finds Alex and the Doctor, the latter trying to solve the mystery surrounding George.

It turns out that they were in a doll's house in the cupboard all along. The Doctor's screwdriver still doesn't do wood (it's getting embarrassing by now, he remarks), so he has to improvise. He calls out to George, who turns out to be a minor Reality Warper accidentally causing all of this. He's an alien larva (a Tenza), whose species act like cuckoos: they leave their young in other species' nests. Alex is horrified at first, but then decides that he doesn't care. Even if his memories were altered, even if his son is actually an alien, the boy is still just George. With The Power of Love from Alex, George is convinced to turn everyone back to normal.

The Doctor leaves the happy family again, saying that he'll come back for another check-up around puberty. Team TARDIS goes off to more adventures, but not without a creepy ending tune, complete with the screen telling us of the Doctor's death.