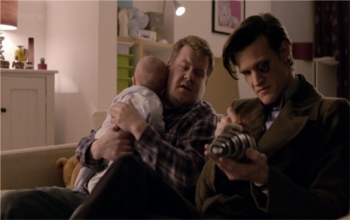 Just a little pit stop on the farewell tour...
"You've noticed something. You've got your noticing face on. I have nightmares about that face."
— Craig Owens
Advertisement:

The one with STORMAGEDDON, DARK LORD OF ALL.

Written by Gareth Roberts. The penultimate episode of the 2011 Doctor Who season. It is a Sequel Episode to the 2010 episode "The Lodger", bringing back Craig and Sophie.

Staff close up a contemporary department store at night, complaining of brief power flickers in the lights. One woman enters the changing rooms, appalled at the mess, but discovers someone still in one of the cubicles. She goes to open the door, telling them the store is closing up, but soon lets out a scream...

Craig now lives in a nice big house with his girlfriend Sophie and their baby boy Alfie. Sophie is not present for the weekend, leaving the baby with Craig. And although Craig insists he can be responsible, several of Sophie's friends and family call to check up on him, leaving him feeling quite unsure of himself as a father.

Someone knocks on his door, and Craig is surprised to find the Doctor there. He immediately suspects the Doctor is investigating something alien.note Well, that's the second thing he suspects. The first thing he suspects is that Sophie somehow got the Doctor to check up on him. The Doctor refutes this, and is only there to drop by and say hello. Why? No reason. He's just making a normal social call in Craig's normal house. That's what normal people do. After speaking to little Alfie and learning that the boy really wants to be called "Stormageddon, Dark Lord of All", the Doctor turns to leave as suddenly as he arrived.

Outside, the Doctor notices a brief flicker in the street lights. He tells himself he shouldn't investigate: he has spent the last two hundred years saying goodbye to friends and allies, knowing that he is destined to permanently die tomorrow in his relative timeline. But the lure of the mystery is too much for the Time Lord...

Craig takes Alfie with him shopping at the department store the next day, and is shocked to find the Doctor there, working in (where else?) the toy department. The kids love him. He's got a name badge and everything (just in case he forgets). The Doctor takes Craig aside, explaining that he's traced power fluctuations to the store, and has heard rumours of a "silver rat". While they investigate, Craig tries the same methods that the Doctor always uses: be bold, be confident, talk to everyone. He's immediately mistaken for a pervert. The baby doesn't help either, even though the Doctor claims that carrying a baby makes everyone act nice towards you. In fact, that's why he always takes a human along. The Doctor has to bail Craig out of a very awkward talk with the store's security guard, and everyone breathes a sigh of relief when they realise that Craig isn't a pervert — he's obviously just the Doctor's boyfriend.

As the two step into a lift, they quite suddenly find themselves transmatted onto a spaceship — one built by Cybermen hands. The Doctor's first instinct is to distract Craig from the approaching Cybermen by wrapping himself around Craig, declaring his passionate love for him and attempting to kiss him to prove it, all the while configuring his screwdriver behind Craig's back. Craig is just extremely confused and dodges, reminding the Doctor that he's already taken. With the Doctor's plan failing quite spectacularly, Craig inevitably notices where they are.

The Doctor quickly reverses the transmat before they are discovered, and disables the device. As Craig departs, the Doctor spots a familiar couple in the department store: Amy and Rory. He stops himself from going to see them and instead hides himself behind some underwear. The two are doing well: Amy has become a famous model for a line of perfume called Petrichor, a scent for "the girl who is tired of waiting".

The Doctor and Craig return to Craig's home, and the Doctor starts to investigate and reprogram the Cybermat to locate the Cybermen. Craig has to go out to get milk. The Doctor checks on the baby, where he learns the child has very little respect for his father. The Doctor tells "Stormageddon" that Craig is trying really hard to be a good dad. And that Stormy is so, so young. He's got his whole life ahead of him. The Doctor doesn't, now being 1103 years old and very, very tired. However, during all this, the Cybermat has become active in the kitchen, and by the time the Doctor returns, it has started moving on its own. The Doctor and Alfie get locked out, and when Craig returns he smashes through the kitchen window to stop the Cybermat in time, leaving the place a mess.

With a newly-reprogrammed Cybermat, the Doctor leaves Craig a note and heads to the store himself. Craig finds the note and shortly follows with Alfie. The Doctor is surprised to find the Cybermat pointing to the changing room stalls, and in one discovers a tunnel leading underground. He follows the tunnel, discovering a centuries-old Cyberman ship buried in the ground. Aboard, he is caught by six Cybermen, their entire force at the time. The Cyberleader explains that they were awakened when the store was built, and are now siphoning small amounts of power to recharge themselves and to grow their army to take over the world.

Meanwhile, Craig learns where the Doctor has gone to, and leaves Alfie with one of the shop assistants. Finding the tunnel, he enters the ship and is also captured by the Cybermen. The Cybermen decide to convert Craig into a new warrior, and put him into the cybernetic transformation device. The Doctor pleads for the Cybermen to stop and to take him instead, but they refuse. As the process nears its end Alfie's cries, heard through monitors the Cybermen have in the store, echo through the ship. Craig, on hearing this, fights to be the best dad he can be, and rejects the cybernetic transformation. The emotional feedback of The Power of Love causes the other Cybermen to regain their full consciousness and sanity. As happened before, the ensuing Body Horror causes them to overload, and they die in anguish. It sends the ship into a self-destruct cycle. The Doctor and Craig safely escape while the ship explodes, the damage confined to the rocky underground chamber. Craig quickly reunites with Alfie, and the Doctor comments that Alfie now finally considers Craig to be his dad.

After a long sleep, Craig wakes up to find his home spotless and the damage from the night before cleaned up. The Doctor appears and admits he time-travelled to complete all the work in time before Sophie arrived home. He explains, with sadness and resignation, that he is now off to America. Craig gives him a Stetson hat from a mate's stag night, while the Doctor borrows four deep-blue envelopes. As Sophie arrives the Doctor vanishes, leaving Craig to explain what happened that weekend. And why Alfie's first word is "Doctor".

The Doctor walks slowly to his TARDIS, a slow, purposeful stride in his step. Three children watch him enter the TARDIS, and suddenly we're hearing their voices, as adults, commenting on how sad the Doctor looked that day.

Dr. River Song, in the 51st century, has earned her degree in archaeology, specialising in the Doctor's history. Now studying the last days of the Doctor, she reads the testimonies of those children. She is surprised when Madame Kovarian enters her room with two of the Silents. Her childhood memories have been quite thoroughly wiped, and she doesn't remember anything about the Silence from her first regeneration. Kovarian tells River that there was no place for her to hide, and that the Silence still have a use for her. They grab her, and soon we see River, trapped in an astronaut's suit, sinking to the bottom of Lake Silencio to wait for the Doctor's arrival.