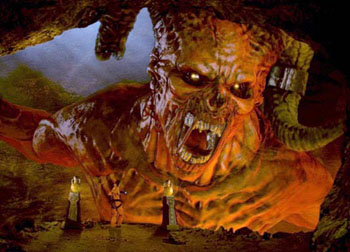 Satan's gonna scare the hell outta you.note Or alternatively: SuperWho, the later years.
"But I've seen a lot of this universe. I've seen fake gods and bad gods and demigods and would-be gods. And out of all that, out of that whole pantheon, if I believe in one thing, just one thing... I believe in her."
— The Doctor
Advertisement:

The other one with SATAN HIMSELF. The Doctor also falls into a pit.

"The Impossible Planet"'s cliffhanger leaves the Doctor stuck at the bottom of a very deep hole, and Rose stuck at the top surrounded by murderous Ood. The Doctor decides that if he can't go up, he might as well go down. The Beast possessing the Ood starts to telepathically taunt the group, bringing out their fears, doubts and guilt. The Doctor tries to get the others to ignore the Beast... Until the Beast starts talking about killing his own race off in the Time War. Before the transmission cuts off, he announces that he'll be free. The crew is now forced to go through the ductsnote with the twist that the ducts are airless; each section needs to be filled with air before it can be traversed to escape the Ood, to get to the main gate.

The Doctor gets to the bottom, finds the Beast himself and sees its real face. However, he notes, based on his unintelligible grunting, that the Beast is quite literally a shell of his former self... with his consciousness possessing Toby and the Ood. The Doctor realises the planet was set up as a trap that will stop the Beast from ever escaping; if some schmoe ever does break the urns that keeps him chained there, the black hole will promptly consume him (and the unlucky schmoe).

Back on the base, Rose and the other members of the group manage to make it out alive, save head of security Mr. Jefferson, who dies defending the group from the Ood. The group are finally calling it quits and decide to leave, although the others have to drug Rose as she wants to stay where the Doctor is. Meanwhile, the Beast, aware that forcing his entrapment could mean certain death for Rose, laughs at his presumed victory. Until the Doctor goes through with his bluff and breaks the urns.

On the ship, Toby, who has been acting strange, reveals himself as the Beast, declaring that he cannot die and will escape... In response, Rose shoots the window with a bolt gun and opens the seat belt so Beast!Toby will be sucked into space...

The Doctor conveniently finds the TARDIS behind him and saves Ida as well as Rose and the remaining crew members by towing the spaceship from the black hole with his own TARDIS! The group wonders what the hell the Beast truly was, but the Doctor seems unwilling to answer, and says whatever it was, it's now gone...

Meanwhile, Rose herself is curious as to what the Beast meant by saying she will die in battle, but the Doctor assures her he was wrong. As the TARDIS disappears the captain of the expedition starts reading out the names of the deceased in the mission, including the Ood, as they return home.