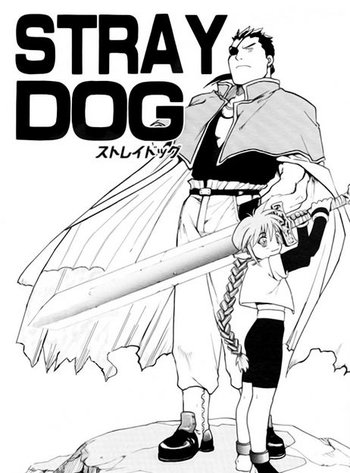 Written by Hiromu Arakawa in 1999, this one-chapter manga (published in a magazine at the time) was her very first serious work. It would eventually influence her later works, especially Fullmetal Alchemist, particularly in her own concept of alchemy itself ("chemistry and magic") as well as that of chimaeras.

It focuses on the story of a bandit, Fultac, and his "military dog" Kilka. A "military dog" is a creature derived from the fusion of a human being and a dog (duh!), which is very loyal to their owner; originally used as soldiers, they are now pretty much pets, and the laboratory where they were created now serves as a factory. After finding Kilka, Fultac and her eventually face a bounty hunter mage and his own military dog.

Overall a good Tear Jerker and heartwarming story, which is pretty much Fullmetals prototype considering the number of terms and plot devices used in the story that would later be recycled in Fullmetals plot.