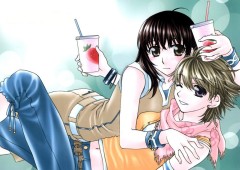 Not pictured: the sharpest tool in the shed.
Teen Idol Tachibana Julia is not thrilled when told she has to look after a newbie... at least, until she gets a look at said newbie, Ran Asakawa. She changes her mind really fast, and so starts the story about their love and whatever wacky things happen to them and their friends.
Advertisement:

Written by Hayashiya Shizuru, the author of Hayate X Blade, Strawberry Shake Sweet started off as a story in Yuri Shimai and eventually moved Yuri Hime, running from 2003 to 2008. As expected of the author of HayateXBlade, the story is chock full of many absolutely hysterical moments and a bunch of quirky characters as well. Definitely a recommended read for anyone who enjoys the yuri genre and comedy.

Was originally called just Strawberry Shake, but got the Sweet added for legal reasons when it changed publishers.