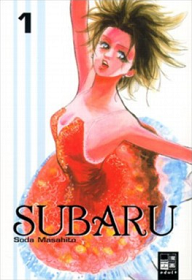 Subaru is an 11-volume-long manga drawn and written by Soda Masahito and revolves around the titular character Miyamoto Subaru and her life of ballet dancing. Because her brother is bed-ridden in a hospital due to a brain tumor that will cause his memory to become impaired, Subaru begins to dance and act out everyday things for him, to remind him of what's going on outside of his little room.

One of her friends invites Subaru to join a free practice session of ballet and Subaru realizes that she has talent for it and begins to consider taking it. Years later, when Subaru becomes a teenager, she decides that this is what she wants to do for the rest of her life. She wants to become a professional ballerina.

, to gain a scholarship to a world famous ballet school. However, when an art director from a professional ballet troupe offers to hire her immediately instead of "wasting away in a mirror-walled dance school", Subaru decides to take this chance and leaves Japan for America. There, she realizes the hardship that being a professional ballet dancer can bring.

MOON – Subaru Solitude Standing is the sequel to this manga and continues the story of Subaru Miyamoto.