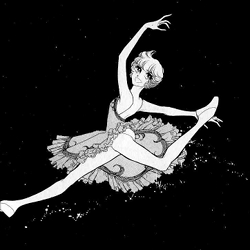 Swan by Kyoko Ariyoshi is a classic ballet manga from The '70s (specifically, 1976-81). It tells the story of aspiring young dancer Masumi Hijiri as she pursues her dream of becoming a star ballerina. Friendships, rivalries, dance competitions, love triangles and old-school melodrama ensue, along with the kind of vigorous training that makes Swan feel like Shoujo's answer to shounen sports manga (and this was running alongside noted shoujo sports hits like Aim for the Ace! and Attacker You!).

Swan is notable for being one of the very few Shoujo manga from its era to have been published in English. Sadly, CMX (an imprint of DC Comics) were only able to release 15 volumes out of 21 before closing down, and the series is now out of print.