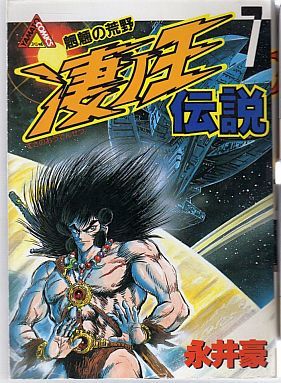 Susanoo is a manga series by Go Nagai. It was serialized in Weekly Shonen Magazine from 1979 to 1981.
Advertisement:

Average highschool slacker Shingo Susa joins his school's ESP Research club by mediation of his childhood friend and unrequited love Sayuri Yukishiro. However, what initially seemed to be a haven for daydreamers and sci-fi lovers becomes a serious affair with the presence of two very real psychics, the beautiful Chigusa Mitsurugi and the mysterious yet not less beautiful Rei Uryu. Shingo's life turns upside down after a gang of delinquents serving a shady organization named Nosferatu make their appearance by attacking them and raping Sayuri. He will have to wake up the psychic powers sleeping inside of him in order to find the truth and gain his revenge.

Nagai's next Dark Fantasy work after Shutendoji, the series was more successful than its predecessor, winning the Kodansha Manga Award and getting republished after some years, but it had the particularity of never receiving a proper ending. After a first magazine run stopped at the story's climax, intentionally according to Nagai, it took 17 years for him to add anything resembling a conclusion, and it is a fairly open one. Some short-lived sequels complete it.