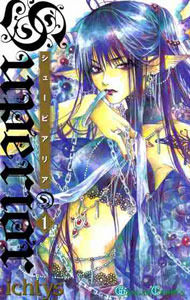 The past: Exa, a little boy with no desire to fight, comes home to find his entire town destroyed by the armies of the demon queen. As he sobs over the corpse of his mother, the queen herself finds him and explains her philosophy: so long as humans kill demons, demons will kill humans, and neither will stop until one is wiped out. Having finished, she tries to kill him, but through luck (and the intervention of a retired hero), she's forced to retreat. In the flame and smoke, neither clearly saw the other's face.

The present: Hunting for the demon queen, Exa finds a mysterious demoness being attacked by a dragon. He rescues her from it, but refuses to kill the dragon—or indeed, any of the other monsters or demons that attack them. As he tells her, every life has value, and for a human to kill a demon would be just as bad as for a demon to kill a human. Intrigued, the the demoness introduces herself as Sheila, and decides to tag along with him for a while—she even agrees to nonviolence, though she doesn't quite buy the concept.

The future: Exa has sworn never to kill, but as a hero, it's his duty to find and slay the demon queen. Sheila tells herself over and over that she'll kill Exa eventually, but she can never quite muster up the will to do so. Each comes to doubt the truth of their philosophy, but neither can accept what the other believes. Even as the two grow closer and closer, Sheila is certain this can't end with anything other than blood.

For you see, Sheila is the demon queen.

Superior and its sequel, Superior Cross, are High Fantasy manga by Ichtys.