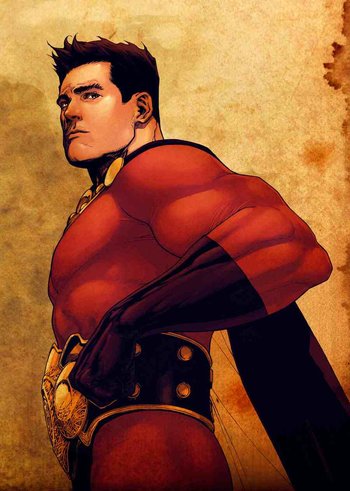 Twelve year old Simon Pooni used to have promise as a basketball player. But then fate decided against it and he was diagnosed with multiple sclerosis. Trapped in crutches or a wheelchair, Simon is living a bully-filled hell. The only escape he has is a series of superhero films about Flying Brick Superior, starring constant victim of I Am Not Spock Tade Scott. Simon idolizes the character, wishing to have his powers so he wouldn't be crippled while also ensuring he never would be bullied ever again. Then a space monkey named Ormon shows up and transforms him into the fictional superhero, gifting him with his powers as well. His dream come true, Simon proceeds to become the selfless hero he idolizes and flies off to try and fix the world. However, unknown to him, Ormon is not who he says he is, and his wish may come with great consequences.

Superior is a seven issue miniseries written by Mark Millar and illustrated by Lenil Francis Yu that doubles as an unapologetic love letter to the Christopher Reeve Superman films and the character of Superman in general.

The series is also noteworthy for its title character being the subject of an attempt at the world record for "Fastest Comic Book Produced" as well as "Biggest Number of Creators Contributing to a Book."