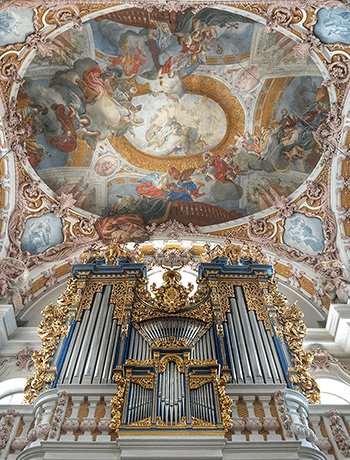 As the largest piece of equipment in churches, pipe organs are often beautiful to look at.
"Where would houses of worship be without this important, historical instrument?"
— The narrator as he listed pipe organ as #9 in WatchMojo, Top 10 Hardest Instruments to Learn

For the best reading experience, play the music from this video

The pipe organ has long been associated with The Church. For this reason, music performed by pipe organ is closely intertwined with religion (or, at least, Christianity) in the public consciousness.

Therefore, when a composer is writing a soundtrack, primarily featuring a pipe organ in their music is a shorthand method of conveying to the audience that the work is depicting a subject regarded as holy, sacred, or religious. This can include churches, temples, gods, paladins, etc.

For works that heavily feature religious themes, expect to hear a lot of pipe organs throughout the music. Conversely, when it is used sparingly, the pipe organ can stand out from the rest of the soundtrack and emphasize one particular moment or scene as religious.

Compare Ominous Pipe Organ. The Holy Pipe Organ is generally used for the Saintly Church while the Ominous Pipe Organ is more closely associated with darkness and villainy. However, they are not mutually exclusive; there can certainly be overlap between the two tropes, especially when Holy Is Not Safe, the church is evil, or God Is Evil. May also overlap with Cherubic Choir and Saved by the Church Bell.

Lohengrin and Mendelssohn tends to overlap with this, as the two famous wedding marches are often played on a pipe organ.