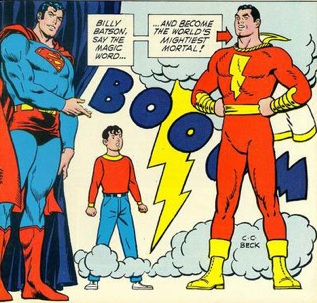 A trope closely tied with the Magical Girl and some Western superheroes, this is a character with the ability to turn into a noticeably older counterpart of themselves. The most famous use is the "Magic Idol Singer", a pretty blatant piece of innocent wish fulfillment.

The wholesomeness (or otherwise) of this idea is its main feature; that characters would run into rather squicky situations if they found boyfriends or girlfriends while changed is surprisingly common, and thus this trope is often combined with Loves My Alter Ego.

Occasionally overlaps with Superpowered Alter Ego. Compare with Dual Age Modes, Overnight Age-Up, Sleep-Mode Size. When the change is more permanent, you have a Plot-Relevant Age-Up.