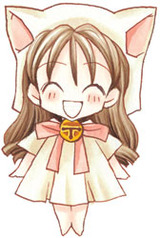 A mangaka who primarily works on Shōjo manga. Born on March 12, 1978, she made her pro debut in 1996 with the one-shot The Style of the Second Love (2番目の恋のかたち, Niban-me no Koi no Katachi), which was later reprinted in the one-shot compilation manga Kanshaku-dama no Yuu'utsu. Tanemura later gained fame less than a year later with the manga I.O.N, a high-school romance (a common staple in the shojo genre) with a supernatural twist.

Her works usually contain Magical Girl stories (with a few exceptions) and extremely cute drawings that are deemed too saccharine for some, juxtaposed against frequently dark and angsty storylines that deal with issues like suicide, parental abandonment, and attempted rape. Tanemura's distinctive art style was intended to be difficult to animate, but this has not stopped Phantom Thief Jeanne and Full Moon from being adapted into anime series.

Most of Tanemura's works were originally serialized in the shoujo magazine Ribon. After the end of Sakura Hime: The Legend of Princess Sakura, Tanemura left Ribon and has since become a freelance artist. Several of her works after 2012 are published in different magazines and publishers.

She is a known fan of JPop music, especially Hello! Project artists and Maaya Sakamoto. This factor eventually turned her into a Promoted Fangirl, as she would later provide the character designs for the multimedia idol project Idolish 7.

As of 2015, Tanemura also releases doujinshi under the pseudonym Meguro Teikoku

Associated Tropes in Her Works: