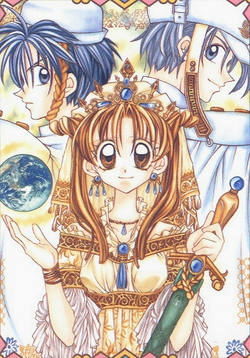 Time Stranger Kyoko is a shoujo manga created by Arina Tanemura. The manga ran from 2000 to 2001 in Ribon, and was compiled into three volumes.

The year 3000, and the world has united itself under one country and is ruled by a benevolent King.

Kyoko is the princess of Earth, but attends school as a regular student and keeps her status as the princess a secret. With the celebration for her 16th birthday approaching, she's faced with the inevitable problem of her identity as the princess being exposed.

The King offers Kyoko a compromise. If she manages to awaken her twin sister Ui from her slumber, Kyoko is free to not attend the celebration and continue her life as a regular student.

In order to awaken Ui, Kyoko must awaken her powers as the Time Stranger and find the other 11 Strangers. With her bodyguards, Sakataki and Hizuki Jin, she sets off on a quest to find them.