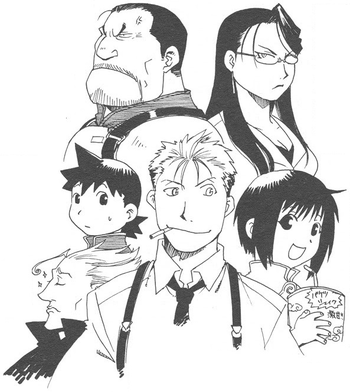 Jack and the rest of the Shanghai crew (and Mr. Dandy).
Advertisement:

Shanghai Youma Kikai was a humourous, short-lived manga series published in 2000 by Hiromu Arakawa. It's about a group of demon-hunters in Shanghai, year 2050, struggling financially (only because they can't manage to do a job without destroying half the city.)

A young boy, supposedly a prodigy on the subject, begs to join the team. Initially, he is turned down. However, that doesn't stop him from tagging along. He soon learns exactly why they rejected him.