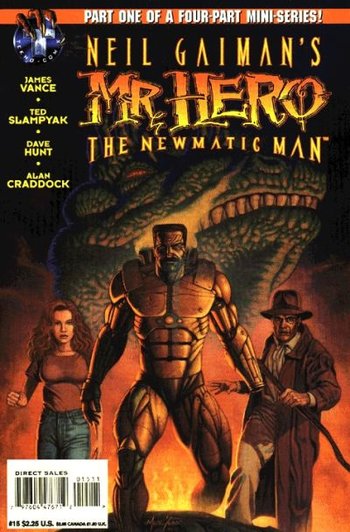 ... but even the Devil can err in his works and in place of a demon... create a hero.

Jennifer Hale, a struggling performance artist, opens an unallocated crate in the museum where she works part-time and discovers a one-handed steam-powered Victorian automaton named Mr. Hero, a gentleman boxer with a cockney accent. After several attacks from interested parties, they're visited by the enigmatic sorcerer Adam Cain, who presents Mr. Hero's other head, known as the Ratiocinator. International and international travel, anti-technology cults, alchemy, an enigmatic sorcerer, chameleonic ninjas and an evil immortal dinosaur bent on corrupting the human race follow.

Based on a concept created by Neil Gaiman, Mr. Hero: The Newmatic Man ran for 17 issues under the short-lived "Teknocomix," and an 18th issue under BIG Entertainment (which went under before a second volume could begin). Its humble presentation notwithstanding, Mr. Hero was well-received and later mourned by the few people who read it. Mr. Hero is dead; long live Mr. Hero.