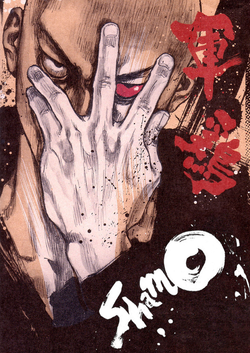 At the age of sixteen, Ryo Narushima was a straight "A" student. He seemingly had no trouble getting into Tokyo University and joining the elite of society. However, that summer something cracked inside Ryo's head. With a small knife, he brutally murdered both of his parents, leaving only his sister alive and cowering in a corner. After being sent to a reformatory, he learns martial arts from an old convict named Kurokawa (who tried to assassinate a politician... also with a knife) that helps him overcome his bullying. He continues to study Karate while at the same time becoming more and more of a sociopathic monster.

Fun for the whole family!

The series seems to be a critique of parents pushing their kids too hard in their academics and being too controlling, seeing as it's what makes Ryo violently attack his own. Whenever someone brings it up he seems truly pissed that he killed them. The manga also has a heavy theme of violence, as it aims to show the thin line between sport and self defense/murder.

. Thankfully, the dispute was settled and the series concluded in 2015 with its 34th volume.