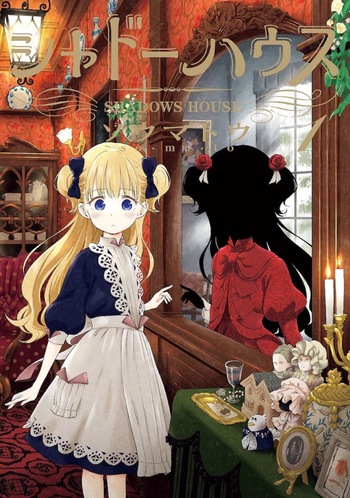 The Lady and her soon-to-be "face".
Advertisement:

Shadows House is a manga by Somato, author of Kuro. Starting out as a Slice of Life story, but gradually accumulating more elements of mystery and horror as it goes on, it follows Emilico, a young and cheerful doll who serves Living Shadow Kate.

The faceless family of Shadow nobles live in a vast mansion, attended by "Living Dolls" who spend much of their time cleaning up the soot endlessly emitted by their mysterious masters. As one of these Dolls, in addition to being her maid, Emilico is expected to become Kate's "face" once her mistress is old enough to be introduced to the other residents of the mansion. Emilico believes that all she needs to do is work hard and make Kate happy, but things in the mansion aren't that simple or pleasant...

The manga began serialization in the seinen manga magazine Weekly Young Jump in 2018, and is ongoing. In December 2021 Yen Press announced it had licensed the manga for release in North America, with the first volume released in June 2022.

An animated adaptation was announced in 2020, premiering in April 2021, with a second season announced in September 2021.