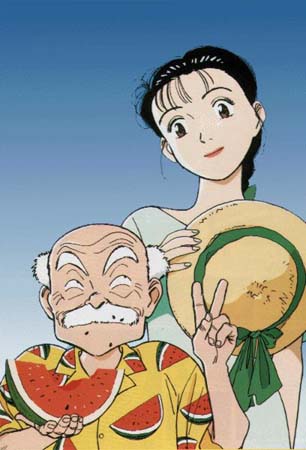 Yawara and her manipulative grandfather.
Advertisement:

Yawara Inokuma is an Ordinary High-School Student. Well, she'd like to be. Unfortunately, she's got a Judo-obsessed grandfather and natural talent for the sport. Her grandfather, Jigoro, is determined that she'll win gold at the Olympics, and has been training her all her life for just that. He's not above using any method to manipulate, trick, or force Yawara into competing.

When a chance encounter (that is, almost being run over by) with bored rich girl and sports fanatic Sayaka Hon'nami, Jigoro jumps at the chance to set up a proper Rival to get Yawara excited.

With over three years left to go before the Olympics, will Jigoro succeed in sparking Yawara's competitive spirit, or will his forceful methods raise her stubborn streak? It doesn't help to have a sports reporter sniffing around for a scoop, either.

The manga was written and drawn by Naoki Urasawa, the creator of Master Keaton, Monster, and 20th Century Boys (yes, really), and it ran in the Seinen magazine Big Comic Spirits from 1986 to 1993. The anime was produced by Kitty Films and Yomiuri TV in Osaka with animation by Madhouse and ran on the Nippon Television network from 1989 to 1992, and has also been dubbed into Italian and Catalan.

The series had such a cultural impact in Japan that teenage judoist Ryoko Tamura, who won a silver medal at the real-life Barcelona Olympics, was tagged by the Japanese media as "Yawara-chan" thanks to her resemblance to the manga character (she eventually did win two gold medals in future Olympics and is now a politician). However, it is much less well-known outside Japan. Its Japanese TV run was contemporaneous with that of Kitty "sister show" Ranma ½ on rival channel Fuji TV, but although Yawara! beat Ranma in the ratings, it was Ranma's less realistic and more fantastic take on martial arts that became the international favorite. In the United States, Yawara! received a partial subtitled-only DVD release in the United States from AnimEigo which was cancelled at episode 40 when the distributor was unable to license the rest of the series, and is now out of print.