Manga / Sing "Yesterday" for Me 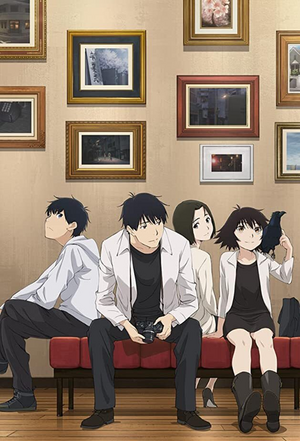 Uozomi Rikuo has been spinning his wheels ever since he graduated college. Rejecting the pressures of social conformity, he took a job at a convenience store and lost touch with his friends. All that changed one night, when a girl shows up at his store with a crow on her shoulder. The girl, a high-school dropout named Nonaka Haru, takes an instant shine to him, and starts dropping in on him at work. Around the same time, he has a chance reunion with Morinome Shinako, an old flame from college with a Dark and Troubled Past who is now a school teacher — at Haru's old high school. The two women meet, and Haru declares romantic war on Shinako. But Shinako has other obstacles keeping her from Rikuo— she's still not over the death of her high school crush, and she's also being pursued by his younger brother Rou, an artistic teen in his last year at her school. Will our characters be able to let go their feelings of yesterday and move on to a new future?
Advertisement:

Sing "Yesterday" for Me (Yesterday wo Utatte) is a manga series by Kei Toume that began in 1997 and finished in 2015. It received a 12-Episode Anime adaptation in 2020 as part of the Spring season, directed by Fujiwara Yoshiyuki and produced by Dogakobo.

Tropes found in Sing Yesterday for Me: