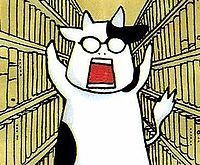 Portrait of the artist as a young cow.
Advertisement:

Hiromu Arakawa (荒川 弘 Arakawa Hiromu, born May 8, 1973) is a Japanese mangaka from Hokkaidō mainly known for Fullmetal Alchemist. Born and raised on a dairy farm, Arakawa spent several years helping out her family farm while taking painting lessons after graduating high school before moving to Tokyo to become a manga assistantnote to Hiroyuki Eto of Magical Circle Guru-Guru fame.

Tropes applying to Arakawa or her works: