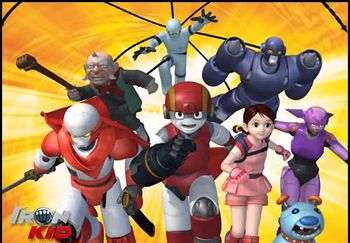 Iron Kid (known as Eon Kid in English-speaking countries) is a South Korean-Spanish CGI animated television series. It's set in an After the End Far East world, where a boy named Marty finds an Ancestral Weapon, the Fist of Eon, which adheres to is arm and grants him the power of becoming the Iron Kid. Along a diverse array of companions, he will face the forces of the evil General in a war for the fate of the world.