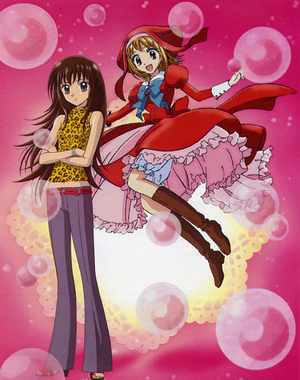 Ultra Maniac is an urban fantasy Shoujo manga/anime series created by Wataru Yoshizumi of Marmalade Boy fame. The manga ran in Ribon from 2001 to 2004.

The main characters are Ayu Tateishi, a realistic, no-nonsense Muggle desperate to maintain her "cool" image because her crush told her it was admirable, and Nina Sakura, a Cute Witch who is Book Dumb, magic-wise, and has come to the human world in order to get better at her craft... which is about where the similarities between the anime and manga end. The anime gives Nina a new magical rival, a quest to obtain a Plot Coupon, and a Magical Girl Transformation Sequence whenever Nina uses her magic.

The manga's storyline isn't amazingly deep; it's a story of relationships and innocent fun. It briefly takes a dark turn near the end, but things turn out all right. It's a cute series, and Yoshizumi's first attempt at a fantasy.

It was popular enough to be adapted into a stand-alone OVA by Ashi Productions in 2002 and as a 26-episodes-long series in 2003 by the same studio.

Ain't got nothing to do with Ultraman, heh.