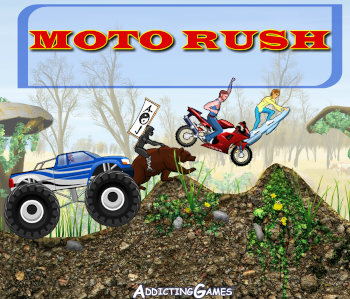 Moto Rush is a Racing Game series by Iriy Soft made in Adobe Flash. The first game was released in July 2008, the second in December 2008, and Kick Buttowski: Moto Rush (featuring the titular protagonist from Kick Buttowski: Suburban Daredevil) somewhere in 2010. You play as one of the four selectable characters (or Kick) and have to get to the end of the track within a certain time or beat other racers to win a trophy. Gaining enough points from trophies unlocks an advanced version of the vehicle and new cups with different vehicles. Make sure to not crash along the way and collect Cheetah Chug to use as a speed boost.

Compare Uphill Rush, another Flash racers with a similar structure.