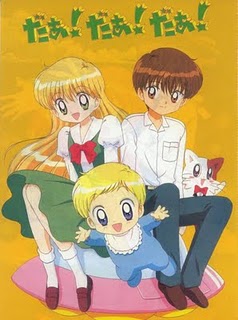 UFO Baby, known in Japanese as Daa! Daa! Daa! (Japanese onomatopeia for baby talk), is a shojo comedy manga by Mika Kawamura, serialized in Nakayoshi magazine between February 1998 and March 2002, and collected in nine bound volumes. The series was adapted as a 78-episode anime TV series, produced by NHK and animated by J.C.Staff, broadcast between March 2000 and February 2002 on NHK's BS2 broadcast satellite network. The series was one of the top-rated anime series during its initial broadcast.

Miyu Kozuki is your everyday Japanese girl, studying in eighth grade, whose parents suddenly leave her in the care of family friend Hosho Saionji, a Buddhist monk, in order to work at NASA in the United States. Soon after getting to know him and his son Kanata (with the mandatory Naked First Impression) that Bumbling Dad of a monk goes on his own journey to India, leaving the two teenagers alone. That very night a UFO crash-lands on the Saionji Shrine's grounds and out comes an alien baby named Ruu and his 'babysitter pet,' a cross between a cat and a dog aptly called Wannya (Bow Meow, in English) which can shapeshift. Stranded until the rescue ship comes for them, they have no other option than start living with Miyu and Kanata, thus forming an accurate explanation of the episode title: Suddenly, a family of four!. And chaos begins.

This sweet shojo gets more and more convoluted the more characters get added to The Masquerade: Miyu's first friends in school are Aya, the half-french ojou Nanami, and pink-haired Rich Girl Christine. The former is obsessed with plays (which Luu often takes part in), and the latter with everything Kanata. Also present are Santa Kurosu, a Fanboy with a Punny Name, and pretty boy Nozomu (second season only). The creator makes frequent appearances as Author Avatar Mikan Kawamura, who is a bit of a Cloudcuckoolander and always thinking about deadlines. Heck, even more aliens join the fest: Seiya Yaboshi, 'nother pretty boy and minor 'villain', and the Waru Waru Dan, which are essentially Team [[{{Pokémon: The Series Rocket]]...IN SPACE! Each and all of them are as memorable as can get, and will make you enjoy this comedy up to the final, final Grand Finale...or until the sequel.