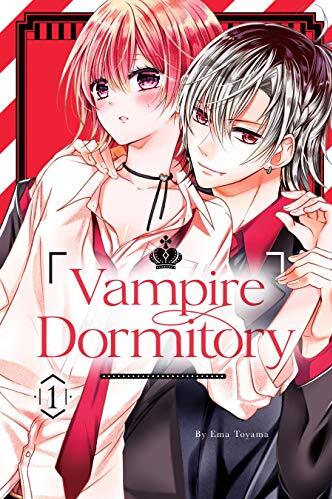 Vampire Dormitory is a manga series by Ema Toyama, which began serialization in Nakayoshi in 2018.

For Mito, being the thrall of a vampire is the least of her worries. Mito's lived life on the streets since she graduated from middle school, dressing as a boy to stay safe. She's managed to eke out a grungy, friendless existence, but when a handsome vampire, Ruka, rescues her from sure-death, he makes her an offer that sounds too good to be true: become his subservient thrall from which he can feed whenever he wants, and she can live with him—in the boys' dorm. Because her very existence depends on her secret not being found out, every day is a new danger—to say nothing of what living with a vampire could mean! Ruka, not knowing Mito's a girl, dotes on her night and day in an attempt to ripen her "disgusting male blood," but the closer he gets to her, the more likely her secret could get out...and the closer she gets to having her new, wonderful life come crashing down around her...

Tropes that appear in Vampire Dormitory