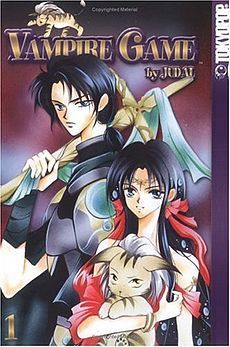 Vampire Game is a manga series by Judal that was first published in 1996.

A hundred years ago the vampire king Duzell tried to take over the world. The king Phelios was the only one who could stand against him, eventually giving his life to defeat Duzell. As they both died, Duzell swore to be reborn a hundred years later to defeat Phelios.

True to his word, he returns a hundred years later... as a cat. Not just any cat, an orphaned cat that gets adopted by princess Ishtar, Phelios's direct descendant. To keep the bloodline pure for when Phelios returns his descendants are all horribly inbred. Furthermore, the whole family is a mess of intrigue, murder, double-crosses, political maneuvering, and more murder, all with the aim of wanting to rule Pheliosta. Ishtar, sick of being treated specially simply because of who her ancestor was (not to mention fed up with the multiple assassination and arranged marriage attempts trying to either bump her off the throne or yank it out from under her), agrees to help Duzell find and kill Phelios in his current incarnation.