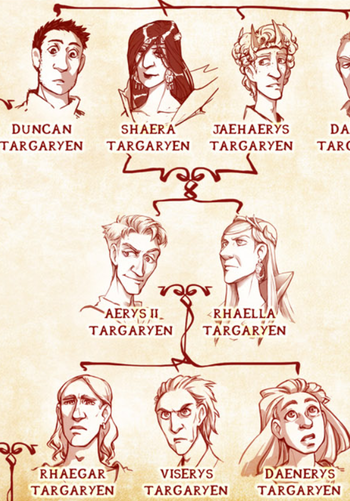 .
"The royal bloodline isn't what it used to be; too much inter-marrying, I suppose. I always say when you reduce a family tree to a family bush, you just can't hide as much beneath it!"
— Regent Virini, Babylon 5
Advertisement:

Often, those of noble or royal birth are supposed to marry other nobles, typically in Arranged Marriages intended to secure alliances, but since there are so few of these people this frequently leads to marriages between cousins or similar relatives. Some even marry their siblings.

To qualify for this trope a family doesn't necessarily have to be literal royalty, but as long as they have sufficiently high status compared to the rest of their society and practice this mostly to "keep it in the family" with either money, powers that are In the Blood or other inheritable traits or possessions it still counts.

Oftentimes this is used to explain The Caligula, Royally Screwed Up, and It Runs in the Family. Might be used to justify a Single Line of Descent and Lookalike Lovers. Inbred and Evil has an interesting relationship to this trope, as the attitudes that were used to justify inbreeding among nobles were pretty much the inverse, but it's also one of many allegations used to prove that Aristocrats Are Evil.

This is Truth in Television, even with siblings (as in Ancient Egypt), primarily as a tool to keep land and other forms of inherited wealth in the same family, or to renew alliances.