And Your Reward Is Infancy 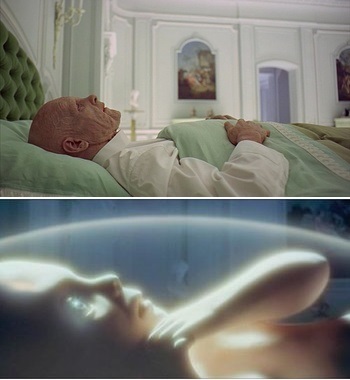 From death to birth.
"Do you know the only reward you get for being Batman?
You get to be Batman.
And—when you're a child—you get a handful of years of real happiness, with your father, with me.
It's more than some people get."
— Whatever Happened to The Caped Crusader?
Advertisement:

So it's the end of the story. Our hero has fought the good fight, and now it's time for them to go on to something greater. Will they find themself in Fluffy Cloud Heaven? Will they Ascend to a Higher Plane of Existence? No, it turns out that their ultimate reward is to... stay right here. As a baby. Huh.

Note that this is not the natural end result of someone aging backwards. This is the universe giving a well-deserving character new life, often returning them to the people who loved them in their old life. This can be especially touching when it happens to a character whose life has been full of hardship, fighting, or suffering; now they can return to a time of innocence, being taken care of instead of having to care for everyone else.

This may involve Reincarnation, but not necessarily; other methods for employing this trope can include De-Aging or Body-Swap.

The villainous version is Raise Him Right This Time. See also Birth-Death Juxtaposition, Dead Guy Junior and Someone to Remember Him By, which often serve as metaphorical versions of this, occasionally even approaching an Implied Trope.

Also, this is an Ending Trope, so Spoilers Ahoy!