Comic Book / Whatever Happened to the Caped Crusader? 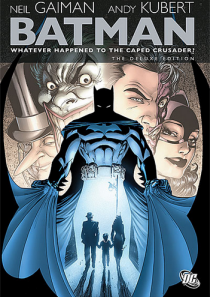 "Whatever Happened to the Caped Crusader?" is a 2009 two-part Batman story written by Neil Gaiman and illustrated by Andy Kubert. It was to be the "last" Batman story after the character's death in Batman RIP and Final Crisis, ending as a summation of the Batman myth and a meditation on his character and its various interpretations.

The premise of the book is that various characters from the Batman mythos are attending Batman's funeral in Crime Alley. Both long time foes and allies of the Caped Crusader are gathered in a temporary truce to honor the fallen hero. Each of them proceeds to tell their story of Batman's death, all the while with the spirit of Batman watching the events along with a mysterious companion.

The stories and illustrations pay homage to many of the major periods and styles of Batman and interpretations of his character and relationships. After full stories from Alfred and Selina Kyle, the book then gives us only glimpses of those told by other characters. One thing known is that all of the stories conflict with each other. For example, The Joker's story has him killing Batman in a scene very reminiscent of The Killing Joke, Clayface's has him sacrificing himself in order to save Clayface, and Superman's has Bruce insisting that Clark take him into certain death, so that he can capture the villain's attention and divert them from killing innocents.

It is difficult to say exactly what the truth of the events is. It could all be a Dying Dream, an actual dream, a psychic vision, pretty much any interpretation you can come up with is possible, though the book seems to subtly favour the Dying Dream position. This interpretation would make it so that the spirit's final speech to Batman reveals that whenever Bruce dies, his soul is reincarnated as a new Bruce in a new universe to become Batman again, as something has deliberately set this up and stopped his soul from entering Heaven or Hell.

Whatever Happened To The Caped Crusader provides examples of: