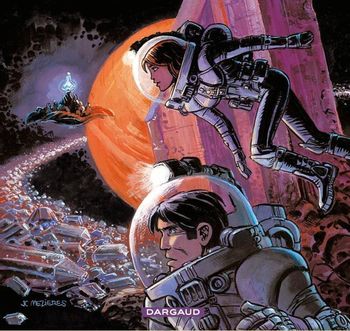 Valérian (later Valérian et Laureline) is a French-Belgian comic book series by Jean-Claude Mézières and Pierre Christin published from 1967 to 2010.

In the 28th century, Earth is the center of a powerful galactic empire, governed along technocratic lines from its capital Galaxity. The basis of Earth's power and civilization is its mastery of Time Travel, which makes both instantaneous travel and control of history possible. An elite corps of time travel agents has been created so as to maintain order throughout time and space, and Valérian is one of its members.

After a trip to the Middle Ages to capture a Mad Scientist who was attempting to alter human history, he met a local girl named Laureline and hired her as his fellow agent.

The series has long been suspected to be a key visual influence on Star Wars, which it predates by a decade. It also influenced The Fifth Element, for which Mézières was actually hired to draw some décors and machines.

A French-Japanese Animated Adaptation of the series was released in 2007 titled Time Jam: Valerian & Laureline.

Speaking of The Fifth Element, Luc Besson directed a Live-Action Adaptation movie of Valerian that came out in 2017, Valerian and the City of a Thousand Planets, starring Dane DeHaan and Cara Delevingne in the main roles.