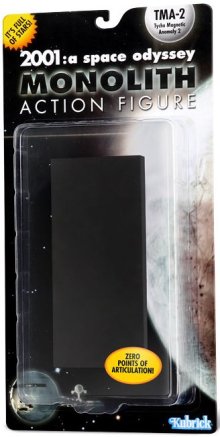 A large black slab of 1:4:9 proportions,note there are more proportions than that if you are capable of looking at it in more than three spatial dimensions placed in reference to the Monoliths from 2001: A Space Odyssey. (The original monoliths were ancient, mysterious, and bizarrely powerful.) One of the Stock Parodies.

Not to be confused with the DC Comics character, a heroic golem; the Marvel Comics character called The Living Monolith, who's an X-Men villain; Monolith the top-down shooter; or The Monolith Monsters.