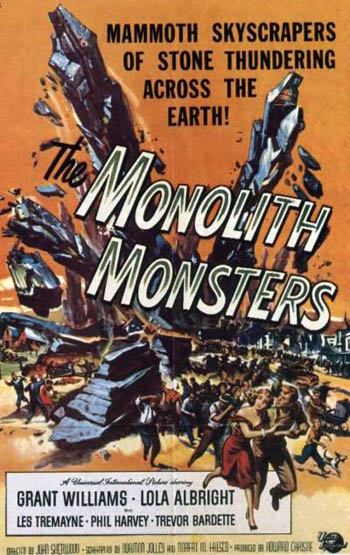 No. They're - quite literally - rocks.

A meteorite lands in the deserts of the American southwest, near the small, sleepy hamlet of San Angelo. The impact scatters mysterious black rocks all over the place. Local geologist Ben Gilbert collects one of them. At night, a glass of water is spilt on it, causing it to bubble and smoulder. Ben stares, dumbfounded. The next day, Ben is found by the head of the geological office, Dave Miller (Grant Williams) standing upright, quite dead. He was petrified - turned into rock. And the rock has grown to an enormous size, destroying the office.

Not long afterwards, schoolteacher Cathy Barrett (Lola Albright) who is Dave's girlfriend, takes the schoolchildren on a field trip to the impact site, where a girl, Ginny Simpson, collects another one of the rocks. Upon going home, she dumps the rock in a bucket of water. That night, sure enough, the rock grows to a huge size and destroys the house, Ginny's parents are found turned to stone, and Ginny herself, though alive albeit catatonic, is discovered via medical examination to be slowly turning to stone herself.

It is eventually discovered by Dave and his old professor Arthur Flanders (Trevor Bardette) that when touched by water, the rocks begin extracting silicon from their surroundings - including organisms that touch them, thus the petrification - and that they thereby grow into pillars which promptly crumble into more rocks, after which the cycle repeats itself. This spells bad news when it rains on the site of the meteorite. Giant monoliths grow and crumble, and then the pieces grow and crumble; causing an outward spread that lasts as long as the source of water does. The rain does pass, but part of the ground still contains moisture causing the monoliths to still grow and crumble along it, encroaching upon San Angelo. It's up to Dave, Arthur, Cathy, reporter Martin Cochrane (Les Tremayne) and police chief Dan Corey (William Flaherty) to stop the spread via unleashing a saline solution on the monoliths.

If anything, this film is a Disaster Movie.