Film / The Thing That Couldn't Die 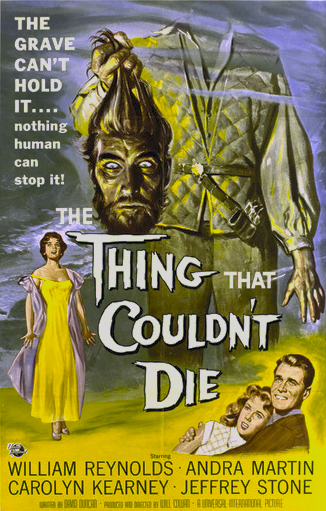 The Thing That Couldn't Die is a 1958 B-Movie horror film directed by Will Cowan.

The plot largely centers upon a college-age girl named Jessica (Carolyn Kearney), along with her greedy aunt Flavia (Peggy Converse). Flavia runs a ranch that doubles as a bed and breakfast. Accordingly, there are several guests at the ranch.

Whilst digging a new irrigation line for a well, aided by Jessica's dowsing ability, a fieldhand finds a chest. Due to the greed of the Obviously Evil fieldhand, the chest is opened...and it contains not gold, but the severed-yet-animate head of a Very Evil Englishman. It turns out the Not Quite Dead Englishman, Gideon Drew (Robin Hughes), was beheaded for witchcraft during the expedition of Sir Francis Drake—but as part of his punishment, he's still alive. Can the Very Evil Englishman retrieve his body and live fully again? Better yet, can he pull it off for longer than thirty seconds?