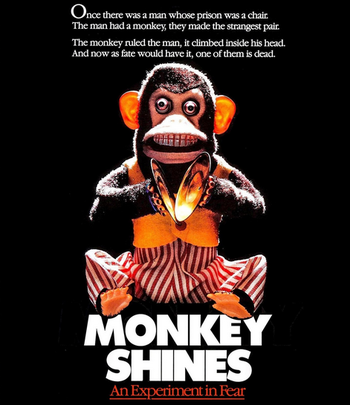 Man has been the only animal capable of murder... until now.
Once there was a man whose prison was a chair.
The man had a monkey, they made the strangest pair.
The man was a prisoner, the monkey held the key.
No matter how he tried, the man couldn’t flee.
Locked in his prison, terrified and frail,
The monkey gaining power, keeping him in jail,
The man tried to keep the monkey from his brain,
But every move he made became the monkey’s game.
The monkey ruled the man. It climbed inside his head.
And now, as fate would have it, one of them is dead...
—Trailer narration

Monkey Shines (1988) is a horror movie directed by George A. Romero and starring Jason Beghe, Kate McNeil, John Pankow, Joyce Van Patten, Stanley Tucci, and Stephen Root. It was based on the 1983 novel by British author Michael Stewart.

Allan Mann (Beghe) is an athletic law student who one day is hit by a truck (in the book crashes his motorcycle) and the surgery to save him renders him quadriplegic. His girlfriend dumps him and begins seeing his surgeon (Tucci), which Allan has no idea about. Unable to cope, he attempts suicide but fails. He soon gets help in the form of a black capuchin monkey named Ella. What Allan doesn't know is that Ella is part of a lab experiment and she begins developing romantic feelings for her master, develops a psychic bond with him, allowing him to see through her eyes and she begins murdering people who Allan has a grudge against. Now Allan has to stop this murderous monkey before she can take over him completely.

Although it was Romero's first studio film, it wasn't a big hit.

No relation with the 1997 Shareware game.