Film / Invasion of the Saucer Men 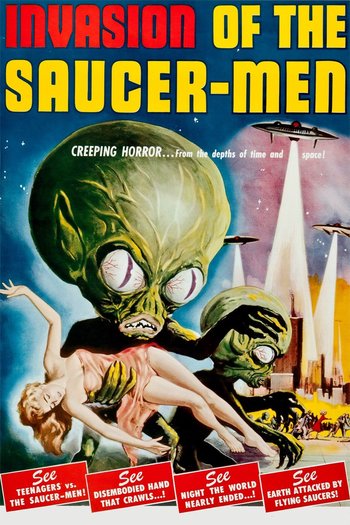 "Pffft! That could be any '50s sci-fi film!"
— The Cinema Snob on the film's title, Shake, Rattle & Rock! review.
Advertisement:

The movie concerns a town named Hicksburg, wherein a spaceship lands in the nearby woods. Drunk opportunist Joe Gruen (Frank Gorshin) ventures out to find it. Meanwhile a teenage couple - Johnny (Steve Terrell) who works in a garage, and Joan (Gloria Castillo) who is the daughter of the city attorney - are driving down lovers lane when they run over one of the epononymous bulbous-headed aliens from the spaceship. The two go off to tell of their encounter to the police, and while they're gone, Joe comes across the alien corpse. The aliens kill via injecting people with alcohol with their retractable fingernails, and do so to Joe. They substitute his corpse for the run-down alien's. The police come with Johnny and Joan back to the site and find Joe, thereby assuming that the two were drunk and ran him over, hallucinating that he was an alien. Without the police's help, the town's teens are forced to take on the aliens themselves...

Was remade for TV in 1965 as Attack of the Eye Creatures.

The design of the character of Morbo from Futurama is based on that of the aliens from this film.