"Mars and Venus?! You mean he thinks we're from—"
— Charlie Bucket, Charlie and the Great Glass Elevator 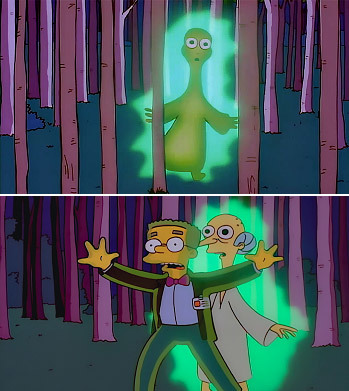 When characters are mistaken for the beings of another world. If you travel through time (especially to the mid-20th century or thereabouts) or are an astronaut, this will probably happen to you at least once.

Yet another variant of Mistaken for Index. For aliens not from space, see Mistaken Nationality. For magical beings mistaken for aliens, or vice-versa, see Alien Fair Folk. Often overlaps with Human All Along.

The Peabody family mistakes the DeLorean time machine for an alien spacecraft.

The Peabody family mistakes the DeLorean time machine for an alien spacecraft.