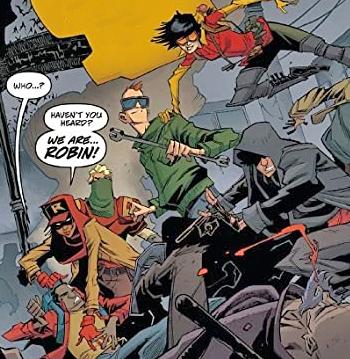 Your town or city has become infested with crime. The Police Are Useless, or crooked, or both. Same goes for the politicians. However, you aren't willing to see your hometown fall into a Wretched Hive of scum and villainy so easily. What do you do? Become a Vigilante Man, of course!
Advertisement:

However, you may quickly find that cleaning up the streets on your own is easier said than done. Worse, if an organised crime group like The Mafia or The Cartel, or other similar organizations are involved you'll be dealing with armed hitmen who are trained to kill. Luckily, you know where you can find some like-minded individuals to join you on your quest for justice. This is where the Vigilante Militia comes in.

Subtrope of Vigilante Man, this group is dedicated to hunting down and striking fear into the hearts of criminals. Often they may be either people who have been wronged by criminals in some way, or simply people looking to make their hometown safe for everyone. Sometimes, they may have someone or multiple people in their ranks who are former law enforcement officers. This will be especially true if they were Cowboy Cops who either resigned or were kicked off the force because of their disdain for procedure.

The Militia's size will vary from work to work. Sometimes they will have a small number of people, while other times they may be the size of an entire army. If the group is one of the larger kind then they may set up a certain way their operatives work depending on their style. They can have their members operate as individuals, or in teams. If they are especially large, they may even be able to operate in places outside their normal city. Perhaps sending people to fight throughout the entire country or even world. In contrast, smaller teams will usually (though not always) stick together so that they have strength in numbers.

Just like the individual version of this trope, Vigilante Man, there can be both good and bad examples of this. A "good" Vigilante Militia, will avoid confrontation with the police as much as possible, will focus all efforts on safeguarding innocent lives, and will try to capture their targets alive so that they can be turned over to the police and receive a proper trial. They will often have support among the police force, who will often tell the press the vigilantes "escaped" before they could be arrested. In contrast, "bad" militias will have no qualms about killing their targets (although not all militias that kill their targets are portrayed negatively). They will engage in Vigilante Executions and this time they can actually form their own firing squad. Bad groups will also fight with the police as well, sometimes even as much as the actual criminals. And if they are one of the larger organizations, as explained above, they may actually be able to take over a part of the town, or even the entire city, effectively overthrowing the legal authorities and seizing power.

If the members have superpowers, then they become a Super Team, which can overlap with this trope if they operate without any official government sanction.

If a group of ordinary citizens are organized into a crime-fighting group by an official and deputized law enforcement officer, then they are a Posse, instead of one of these as they operate inside the law and will have been deputized accordingly (there may be borderline cases if a group of Dirty Cops form one, but these are the exception rather than the rule). If it's just a mob whipped up into a frenzy against someone, whether they're guilty or not, and usually disbands right afterwards, that's Torches and Pitchforks (although if they have enough organization and time to think things out, they might qualify for both). Generally not a Right-Wing Militia Fanatic, although overlap is possible; in recent history (especially during the Cold War) militias have often been hired by right-wing governments to augment the latter's use of violence against all opposition, Communist or otherwise. On rare occasions, the opponent they form to fight may be a monster instead of human criminals.

See also Vigilante Man, the individual version of this trope. Compare La Résistance (which forms against foreign invasions, not general lawlessness), Torches and Pitchforks (likely to be gathered for a single, sometimes unjustified, act of violence against a hated figure and perhaps even being willing to kill their way past lawful authorities), and The Magnificent Seven Samurai (a group of heroes defends a small community from either bandits or a tyrannical overlord).