Literature / Cycle of the Werewolf 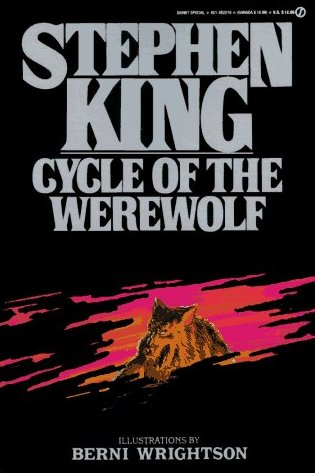 A short story written by Stephen King and published in 1983, Cycle of the Werewolf is about a small town in Maine that is terrorized by a series of killings. According to That Other Wiki, King originally started the project when he was asked to write twelve short chapters that would accompany a werewolf-themed calendar. Apparently, no one told them that this is the guy who wrote The Stand— the "uncut" version of which is over 1,100 pages long. Inevitably, the decision was made to scrap the calendar idea, and release the story in Graphic Novel form with accompanying illustrations (by Berni Wrightson, of Swamp Thing fame). The influence of the initial idea can still be seen in the format of the story, though, as each chapter focuses on one month in the year of the killings.
Advertisement:

The story uses a whodunnit format for the most part, with the reader knowing that a werewolf is responsible for the killings, but not knowing who the werewolf is. It also has plenty of horror scenes, with most chapters describing a werewolf attack rather than developing the non-victim characters. The first survivor, a crippled boy named Marty Coslaw, is not introduced until the third of the twelve chapters, and is only featured prominently in chapters seven, ten and twelve. As a result, there is no strong protagonist to oppose the werewolf, and some may consider the narrative to be a little weak for this reason.

In 1985, the story got a film adaptation called Silver Bullet, starring Corey Haim as Marty and Gary Busey as his alcoholic Uncle Red. In the movie, Marty is featured as a main character from the beginning and his experiences throughout the year receive just as much attention as the werewolf killings. This fixes the problem found in the book, which makes the film one of the better adaptations of one of King's stories, even though most reviews regarded it as good, but not great.

Cycle of the Werewolf provides examples of: