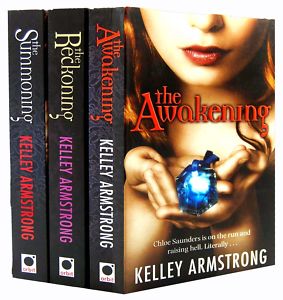 "There was no sign on the front lawn proclaiming Lyle House for Crazy Kids."
Advertisement:

A series of Young Adult novels by Kelley Armstrong, set in the same universe as her adult series The Otherworld. The series is divided into trilogies, each narrated in first person by a different character. Darkest Powers is the name of both the entire series, and of the first trilogy in the series.

The first trilogy, Darkest Powers, is narrated by Chloe Saunders, a fifteen-year-old girl who's diagnosed with schizophrenia when she starts seeing ghosts. She's sent to a group home for mentally disturbed teenagers but she soon starts to realize that there's more to her problems than insanity.

The second trilogy, Darkness Rising, is narrated by Maya Delaney, a sixteen-year-old girl with a birthmark in the exact shape of a cat's paw. A newcomer to her tiny town also starts to pay attention to her - and her birthmark.

Summary of The Summoning

After years of frequent moves following her mother's death, Chloe Saunders' life is finally settling down. She is attending art school, pursuing her dream of becoming a director, as well as making friends and (hopefully) meeting boys. Her biggest concern is that she's not developing as fast as her friends are. But when puberty does hit, it brings more than hormone surges. Chloe starts seeing ghosts—and starts seeing them everywhere, demanding her attention. After she suffers a breakdown, her devoted aunt Lauren gets her into a highly recommended group home.
At first, Lyle House seems a pretty okay place, except for Chloe's small problem of fearing she might be facing a lifetime of mental illness. But as she gradually gets to know the other kids at the home—charming Simon and his ominous, unsmiling brother Derek, obnoxious Tori, and Rae, who has a "thing" for fire—Chloe begins to realize that there is something that binds them all together, and it isn't your usual "problem kid" behaviour. And together they discover that Lyle House is not your usual group home either...
Advertisement:

WARNING: There are unmarked spoilers for both The Summoning and The Awakening ahead; anything actually put in spoiler tags signifies big, big spoilers for The Reckoning.

This literature series provides examples of the following tropes: