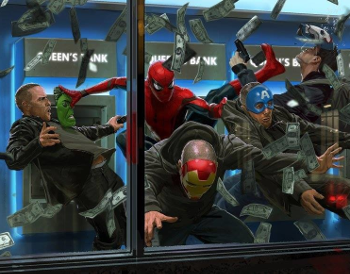 Prisoner: You are in hell, little man. And I am the devil.
Bruce Wayne: You’re not the devil. You’re practice.
— Batman Begins
Advertisement:

They're not the Big Bad; they're too small time for that. Heck, they're not even Monster of the Week level. But they're not working for another villain, either, so they're not really Mooks. These are Villains whose duty is to show up for a single scene, maybe two if they're lucky, and cause some minor trouble before the heroes kick them into next week and move on to the real plot.

Why bother including such a meaningless bad guy? It could be the story was running a little light on its action quotient and needed an excuse for some mindless violence. Maybe the writers wanted to show what the heroes' lives are like in-between more significant adversaries, or create an Establishing Character Moment for a hero we don't know very well yet. Maybe the episode was running a little short, and they had to fill up an extra five minutes with something.

Or maybe, while the Bit Part Bad Guys themselves aren't important, something that happens during the fight with them is. The hero might meet the Girl of the Week by saving them from one of these villains, or maybe it's during one of these quick fights that the Superhero will discover something's wrong with their powers, or maybe, because the hero was busy taking this bad guy down, they weren't at home to stop someone from getting kidnapped or worse, which may even elevate them to the level of Small Role, Big Impact.

Whatever the case may be, the Bit Part Bad Guy always gets the short end of the butt-kicking stick. They'll almost always be quite low on the Sliding Scale of Villain Threat and, compared to the rest of the story, on the silly side of the Sliding Scale of Silliness vs. Seriousness. Now it must be said that all this doesn't mean that they are necessarily ineffectual or not a threat to a random citizen, it just means that they are small fries in a much bigger pond. They can be quite dangerous and evil on their own for non-powerful heroes and will often in fact be given Kick the Dog or Politically Incorrect Villain traits, if only to justify their getting a comeuppance. The best hope a Bit Part Bad Guy has is to make a strong enough impression during their brief appearance that audiences demand they be brought back again, possibly upgraded to Monster of the Week status. Only once in a scarlet moon can such a villain even dream of becoming Big Bad material, though. Their tendency to think small and opportunistically look for easy targets generally disqualifies them from becoming someone with grander plans or vision of any sort. A Filler Villain could be considered one step up— at least he gets to be the villain of a whole episode or arc, even if it's not a very important one.

Sub-Trope of Bit Character and Plot-Irrelevant Villain; Super-Trope of Mugging the Monster. Common in a Batman Cold Open, when said Cold Open doesn't feature a recurring villain; however, Bit Part Bad Guys can show up anywhere in the story, up to and including right before (and after) the climax.

See Random Encounters for the Video and Tabletop Games version of this trope.