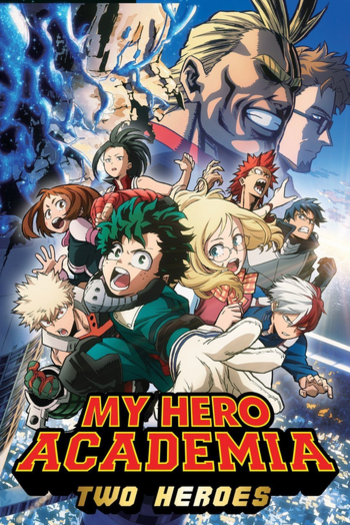 Who is your hero?
Advertisement:

The film is set before the events of the Training Camp Arc, with All Might receiving an invitation from an old friend to visit the floating and mobile city "I-Island". Researchers from around the world are gathered to research Quirks as well as Hero supplemental items at the special convention that is held on the island. While this is going on, All Might looks back on his past before he became the Symbol of Peace.

The film was released on August 3rd, 2018 in Japan. Funimation provided a limited showing of the film's English dub in theaters from September 25 through October 2, 2018 in the United States and Canada. There was also a special showing at Anime Expo on July 5th.

A one-shot prequel manga There Will Always Be Someone Out There Who's Someone Else's Hero about Melissa's past and how she met All Might was published to tie in with the movie. Melissa is also set to appear in the Team-up Missions spin-off manga.