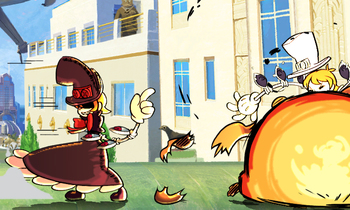 Some fighters are so badass that they don't even have to look. They can beat you with their back to you.

If both opponents attempt to fight each back to back, this may lead to dizziness on the part of the combatants. This would not make them Back-to-Back Badasses. It would celebrate the joys of spinning around like idiots.

Sometimes, to show how much stronger their kung fu is, one fighter turns around condescendingly to expose their weak spot. The other, incensed by this, runs up and starts throwing everything they have at them. However, their attacks are all avoided or parried easily, usually with a single hand, and without even looking.

Similarly, for a finishing move in a sword fight, the user can thrust their sword under their shoulder, stabbing the opponent in the process. Characters with super regeneration have even been known to stab the enemy through themselves. If the hero is fighting against an opponent before him simultaneously, he may nevertheless wreck a rear attacker with a Dangerous Backswing.

In a Single-Stroke Battle, started and finished as his opponent charged him, the victor can sheathe his sword and walk away, paying no mind to the lifeless body of the person he defeated in seconds as it falls to the ground.

Compare Offhand Backhand (suddenly striking someone behind you without even looking), Unflinching Walk (which can overlap with this trope), and also to In the Back.