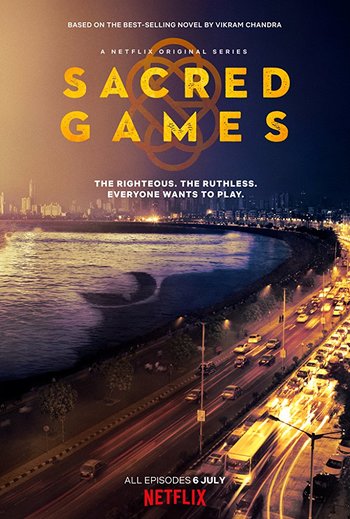 There are twenty-five days. Save your city.
"Do you believe in God?"

Sacred Games is a Netflix Original Series adaptation of Vikram Chandra's novel of the same name. Released as a part of Netflix Indian Originals and produced in collaboration with Phantom Films and directed by Anurag Kashyap and Vikramaditya Motwane, the series stars Saif Ali Khan, Nawazuddin Siddiqui, and Radhika Apte. The series was released to Netflix on July 6, 2018.

Sartaj Singh, an honest police officer in Bombay, receives a call from an anonymous tip-off. The caller is notorious criminal Ganesh Gaitonde, who has been missing for the last 17 years. Gaitonde tells him the story of his life, and leaves a single cryptic warning.

Sartaj has 25 days to save the city.